BEHIND THE DESERT WALL – 52 minutes

This documentary gives voice to the Saharawi people and seeks to understand how, through the tragedy of exile, a group of nomadic people has forged a strong sense of nationhood and an unwavering dedication to the cause of an independent homeland. 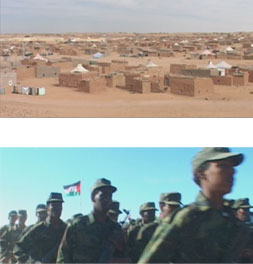 Hidden away deep in the vast expanses of the Sahara Desert, in one of the most barren places on earth, the Saharawi people struggle to survive. Forced to leave their own country, Western Sahara, by Morocco in 1975, they have lived ever since in refugee camps in the harsh desert wastelands of southern Algeria.

This is a largely unknown and undocumented story of immense proportions, happening on the doorstep of Europe. Western Sahara is Africa’s last colony. Very few people are aware of this or that a 2,000 kilometre wall manned by thousands of Moroccan troops keeps the Saharawi people out of their own country. The singer, the writer and the President tell their compelling story.